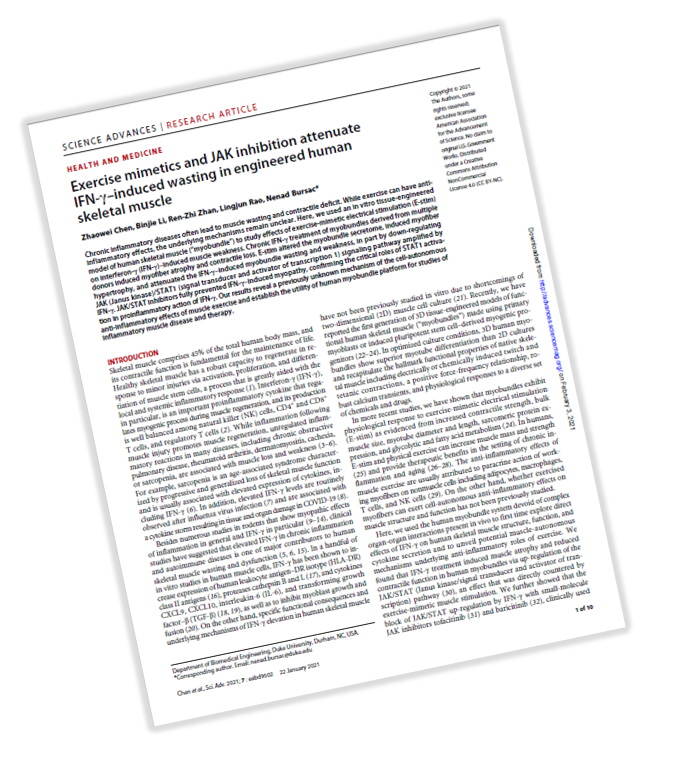 In a newly published article from Prof. Nenad Bursac’s group in the Bioengineering Department at Duke University, Zhaowei Chen and colleagues have demonstrated that exercising muscle can fight against the effects of chronic inflammation.  Presenting their findings in the journal Science Advances, they made use of electrical stimulation and a novel testing platform that they have developed, for in vitro examination of engineered human muscle tissue.

In their most recent paper, they took cultured human myotube bundles, essentially miniature functioning muscles, and measured their strength under control conditions and following sustained treatment with interferon gamma.  As would be expected, the interferon gamma led to a severe inflammatory response and a significant loss of muscle strength.  They next looked at how a long-term exercise regime would influence the effects of interferon gamma.  In this case, the “exercise” involved electrical stimulation of the myotube cultures for 7 days in the presence or absence of interferon gamma.  Stimulation was delivered to cultures in custom-made PDMS chambers via parallel carbon electrodes using the modular Digitimer D330 MultiStim System.  Due to its high power capabilities and suitability for multi-channel field stimulation, the D330 MultiStim is able to provide a high voltage, constant current pulses of alternating polarity and is ideal for this sort of application.  In their experiments, Chen and colleagues employed hour long stimulation protocols with 7 hour rests, controlling the D330 with Labview software.  The hour long periods of stimulation consisted of regular 10Hz bursts, with pulse durations of 2ms and at an amplitude of 70mA.

Following seven days of electrical stimulation, they re-examined the properties of the myotube bundles and were surpised to find that the simulated exercise induced by the electrical stimulation protocol almost completely prevented the effects of chronic inflammation.  They suggest that their human myobundle testing platform could provide a means to investigate inflammatory muscle disease and potential future therapies.

The D330 MultiStim configurations used by Prof. Bursac’s group consist of pairs of D343 Constant Current DualStim and D342 Bi-stim modules. Timing control was applied by Labview on a per channel basis via the D344A Remote, which accepts TTL inputs to activate each of the four stimulation channels.  Finally, a D335 Meter module allowed realtime visual monitoring of stimulation current or voltage.  With low enough tissue chamber impedances, the D343 modules are able to output up to 500mA from their 100V compliance source.  Note that the D330 MultiStim can also be configured to deliver constant voltage pulses and the range includes timing modules that allow autonomous control of stimulation.

Want to Find Out More?

You can read more about their research in a news item on the Duke University website or alternatively you can access the full open-access paper in Science Advances (link below).  A brochure for the D330 System is available here.